Reason #2:  Making a number on the scale the center of your universe is a fruitless endeavor.

As kids, we can become very attached to our favorite toy, blanket, or stuffed animal. It is as if these beloved items have a magical power over us, a force that is so powerful it can stir up the fiercest beast in the smallest person. Hide a kid’s blankie or stuffed animal right before bedtime and you can witness this phenomenon first hand. It is meltdown on the spot. Who knew these items could have such a powerful hold on such a young soul?

As adults, we may graduate from these childhood items but then replace them with other security blankets. This differs for everyone. It may be money, achievement, position. . . but for some of us, our magic blankie is a number in our head of our dream weight. It is the answer to all our problems, the center of the universe.

And even if we do reach that number (which many never do) there still remains a void. That’s because a number on the scale was never meant to satisfy your soul. But peace, well yes, peace has the power to do exactly that!

Now, that’s not to say you can’t have a goal number you would like to weigh. There’s nothing wrong with that. In fact, we encourage you to know what weight range you feel best in and set goals to get there, but expecting a number to “complete you” is a fruitless endeavor.

How do we know this? Because we’ve been there a hundred times. We went on a diet and reached our goal weight, but instead of experiencing excitement and joy, we were jolted with disappointment and disillusions.  Our so-called magic number didn’t produce the peace we had expected.

But when Peace with Food came into focus that all changed.  That’s because a number on the scale was no longer the number we obsessed over.  Instead, we were inspired and motivated by a number that trumps all other numbers: #PEACE. Now, we ask ourselves this: On a scale from one to five, how much peace do I have in regards to my eating and body?

It no longer matters what the scale says.  If the number on our peace-meter is any lower than a four, we know we have to make adjustments so our number and happiness is better next time.

What number would appear if you were weighing in on your peace in the area of eating and your body?  This is the number that you have control over. Consider changing your focus from a number on the scale to the number on your peace.  We think when you do, you’ll be pleasantly surprised to see that your goal for the scale will eventually catch up. 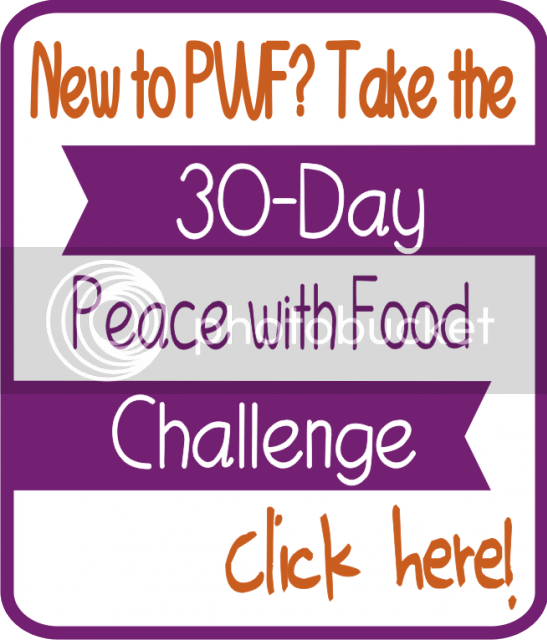